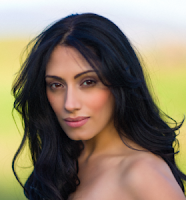 Have you ever met someone that no matter what they put their hands on they are just naturally good at it? Well, that’s Tehmina! Born in London she was exposed to the arts very early, she received a scholarship for playing the violin, viola and piano. Tehmina is also a songwriter and vocalist and though she had a very promising and bright future with it all—can you believe she put it all on hold to pursuit her education? Wow!

And pursuit her education she did, she received a Bachelor of Science degree with honors. She attended the University of Leeds in England where her major was Business Information Systems and minor of Artificial Intelligence and Computer Science and she is fluent in English, Gujarati and Hindi. (You can’t say that’s not commendable). I asked Tehmina “What is it you think makes you so good at everything?” and she sites that it is the Virgo in her with laughter.

Tehmina is rising very fast in both Television and Film and she’s only just embarked upon this industry four years ago. She has already been on some of television’s biggest hit TV shows, such as NCIS, Californication, Heroes and Undercovers and if you think that’s it, that’s what you get for thinking. LOL! Tehmina will always be one step ahead because she has just completed the movie “Elevator” which just came out. She will also be in a movie called “Singularity” starring Neve Campbell and Josh Hartnett 2012 and last and not at all least she is currently working on “Argo” which is Ben Affleck’s anticipated awaited production in collaboration with George Clooney and directed by Ben Affleck.

When talking to Tehmina I asked her how was she able to balance her schedule and she says she has a great team that helps. She currently resides in California and she says she loves it here; she calls it home! If you would like to know more about the beautiful and crazily talented Tehmina Sunny then please visit www.londonflairpr.com/tehminasunny.