I know that there are a few people who has shared the same experiences as I have when it comes to credit; meaning when you were younger there was no one in your family who told you about the value of credit, so like me, you probably learned the hard way.

Obtained more than enough colorful credit cards with high interest rates, you were shopping here and there along with life’s unexpectancies, and with the overwhelming vicissitudes of life, you found yourself having more than a $1000 in debt; am I right?

So, you filed bankruptcy because through it all you picked up a few things along the way so you’ll know what not to do this time around (for those who don’t believe in the Albert Einstein theory) but you really don’t know the basics. Well, here is where Shay Olivarria comes in with her latest book entitled “10 Things College Students Need to Know About Money; small change make a big difference.”  Shay gives you much needed information. She gives you the breakdown in a simple way; your attitude toward your money, financial worth, making your money work for you and your futuristic plans such as your student loans and retirement.

I urge you, encourage you to challenge yourself to enhance your mind by purchasing her book and read it, so that she will enlighten you. I know I have and I feel a lot better about myself do to how I handle my money now. What about you? To explore more books please visit www.calcrusnews.com. 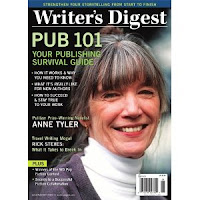 Hey everybody out there in reader’s land! You already know this is Quanda R. Graves with the latest book review, but instead of giving you a book this week, I thought I would change it up a bit. Today, it’s Writer’s Digest Magazine! I chose to feature this magazine because I know a lot of writers, and as a writer myself, being in this wonderful world of words, you tend to feel like your job is never done. As a writer you’re always writing, rewriting, revamping, over editing because you want it perfect-and although there is no such thing; you still persist on striving for that unexisting place of perfection.

Writers always look for many ways to enhance their literature by vocabulary, style, tone, and most importantly a way to perfect their voice in their writing so that when people read their pieces, people know exactly who they are, know their signature. So to help those who are constantly working toward that on-going goal (like myself) I have just described. I bring to you “Writer’s Digest Magazine.”

What is Writer’s Digest Magazine you ask? It’s a magazine that comes out once a month and what this magazine entails is a beautiful array of information for any kind of writer. Whether it be for poetry, memoirs, essays, teen writing, or aspiring writers who have no clue as to where to begin etc., it’s there. Writer’s Digest Magazine gives you great strategies on how to go about beginning your first book, to enhancing your writing skills, ideals and imagination to bring out the best story in you. It also shares suggestions on how to deal with writers block, character development and teach you how to expand your writing theories.

Furthermore, how to write query letters, to finding an agent and not to mention they always provide you with amazing interviews of influential authors, for example Alice Walker (Black history month) and much more.

I urge you to unlock and enjoy the immeasurable amount of tidbits Writer’s Digest Magazine has to offer you. Until next time, enjoy Black History Month and remember, for more books please go to the following: www.calcrusnews.com.

Hear ye, Hear ye! Come one, come all! There is a new stage play coming to you this fall!

CCN is always excited to hear and report positive new ventures and events from anyone and everywhere and we have just found out about the play entitled; Neighborhood Watch. It’s about four elderly women who decide to take back their community from the drug dealers and misbehaving youth and it’s making its way to Riverside, California hosted at UCR Theatre.

If you would like to know more about the play and purchase tickets please call (951) 640-0227 or visit the website at www.gbgproductionsinc.com. Enjoy!

Also just a tidbit of information, your book reviewer (Until) will be featured in this play as the narrator. I look forward to seeing you there.


*Pictures by QS Images
Flyer by Corbro Designs
Posted by Until... at 5:09 PM No comments:

Love in All the Wrong Faces By Quanda R. Graves

There is a new play coming to your town and you can look forward to it becoming a desirable play to see. The play, Love in All the Wrong Faces, though not a gospel one, it is a biblical story of the whale made modern and relatable to invite the audience in.  I was blessed to interview the writer/producer, director, the lead and supporting actors; and how I did these interviews were one by one on the telephone.

First up was Fredericka Meek who plays the lead “Destiny.” I asked what made her want to play Destiny and she explained that Destiny is so opposite of her. She is a high maintenance drama queen who acts out in every way possible. Fredericka enjoys the challenge and also adds that though Destiny has a bit of a journey to go through it’s nice to see her outcome.

Next up was, Wallace Demorria who plays the supporting role of Lester; who is looked at as the bad guy. However, Wallace doesn’t see it that way, he explains that Lester is a guy who is missing something in his life; he’s just a good guy that’s good at being bad and says he’s misunderstood which can attest to his personal life as well.

I moved forward to, Taja Simpson, the director who is also by the way no stranger to acting at all. When asked how important is it to create each scene and is it a lot of pressure? She explains it’s no pressure at all, black outs may not be her thing but she understands them. She just wants to make sure that the scenes are all made seamless.  Last but not at all least, I spoke with Laval Belle, pastor, author, producer and more. The writer and producer of the play, this play Love in All the Wrong Faces derived from his book of the same title which came from one of his sermon’s of that biblical story. When I asked Laval why he felt this play needed to be told he said that a lot of us need to love ourselves, find our purpose in life and embrace the inspiration for it, which is what makes a great story.

I have to say I have never had such a fun filled morning speaking to so many people. When speaking to them all, in a nutshell, this is what is was; they believe in this story, they all could relate to the play and they each appreciated each other and what they brought to the table and loved how Laval made the play an incredible puzzle.

Taja is known as the “actor’s director” who by her cast members attest and say that she brings out the best in them which makes part of the play what it is. The writer/producer explains that she is a “God send.” They all say the play speaks for itself and Wallace says that there are a few Destiny’s out there (though some will probably never admit it) but he knows many of them and this is a play to see.

Wow! Talk about the love. I love all of them for their professionalism and realness. To see the play Love in All the Wrong Faces and learn more about the Laval Belle, Taja Simpson, Fredericka Meek and Wallace Demorria please visit www.eventbrite.com.