The Voice in the Head "short film" 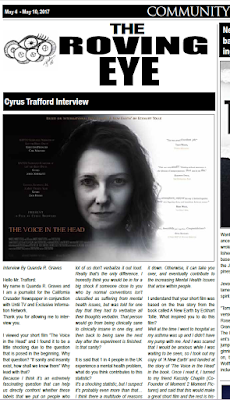 My name is Quanda R. Graves and I am a journalist for the California Crusader Newspaper in conjunction with Until TV and Exclusive Information Network. Thank you for allowing me to interview you. ☺

QRG: I viewed your short film “The Voice in the Head” and I found it to be a little shocking due to the question that is posed in the beginning. Why that question? “If sanity and insanity exist, how shall we know them” Why lead with that?

QRG: Is it in your own belief that insanity and sanity go hand in hand? Or that we are sane but if you’re not careful insanity can become our reality? Just wanted to know your thoughts on this.

CT: What is Sanity? How do you define Sanity? Personally speaking I think 99.9% of us are ‘insane’ and have a constant monologue running through our heads on a day to day basis. The only difference is that a lot of us don’t verbalize it out loud. Really that’s the only difference. I honestly think you would be in for a big shock if someone close to you who by normal conventions isn’t classified as suffering from mental health issues, but was told for one day that they had to verbalize all their thoughts verbatim. That person would go from being clinically sane to clinically insane in one day, and then back to being sane the next day after the experiment is finished. Is that sanity?

QRG: It is said that 1 in 4 people in the UK experience a mental health problem, what do you think contributes to this statistic?

CT: It’s a shocking statistic, but I suspect it’s probably even more than that… I think there a multitude of reasons that contribute to making up that statistic (1 in 4), but with the advent of social media playing a more prominent role than ever in our day to day lives, lets tackle this reason for this question. Social Media is a perfect example of ‘A Gift and the Curse’. In one respect it allows you to easily connect with people in foreign countries, stay in touch at the click of a button, call people, find beneficial groups to join, etc. the list is endless.

However, at the same time, if not monitored your social media can start to use you rather than you using it as a tool. You start checking your Facebook Timeline when you have a spare moment even if you didn’t have a specific reason to check, you start “quasi-stalking” people by looking at their profiles, you start to compare yourself to other people, etc. again the list of negatives are endless.

So I would implore people to view Social Media as merely a tool, to use it for a specific task and then put it down. Otherwise, it can take you over, and eventually contribute to the increasing Mental Health Issues that arise within people.

QRG: I understand that your short film was based on the true story from the book called A New Earth by Eckhart Tolle. What inspired you to do this film?

CT: Well at the time I went to hospital as my asthma was up and I didn’t have my pump with me. And I was scared that I would be anxious while I was waiting to be seen, so I took out my copy of ‘A New Earth’ and landed at the story of ‘The Voice in the Head’ in the book. Once I read it, I turned to my friend Kassidy Chaplin (Co-Founder of Moment 2 Moment Pictures) and said that this would make a great short film and the rest is history.

QRG: Now to the feedback on this film. Do you feel great about tackling such a subject that is quite sensitive and in some cases taboo to speak about?

CT: At the very inception of making a film, I only ever enter it from one of two ways. First way, I hear/read a great story, come up with a great idea, and as a result want to make the film purely because the story has inspired me to. The second way and this is the approach I am naturally gravitating more to as I get older is the first question I ask myself at the inception of making a film: how can I make my audience more conscious? And I am not merely talking about making people conscious of this issue or that issue, because humans as a species have evolved over the last century to becoming more conscious this issue and that issue. So what am I talking about then? I am actually talking about making audiences more conscious, in other words more PRESENT through watching the film. So the first question I try to ask myself now is what story (and how can I tell the story in a way that) can help push audiences into a state of pure consciousness, i.e. make them present. So to answer your question, I never set out to make films to tackle sensitive subjects, it just so happens that tackling sensitive subjects become part of the story in order to help achieve the bigger goal of making audiences more present (conscious).

QRG: What’s in the future for Cyrus Trafford?

CT: Three things if I’m lucky, one for sure. I am currently in production on a short film called ‘Lost to Rhythm’ that is a hybrid of animation and live action. At a ‘surface level' the film is about ‘Freedom of Expression’ but for me it’s deeper than that, for me it’s about how to accept one’s own death in an extreme limit situation, and again how that can make you feel at peace. Since I had the idea for the film, and by the time it will have finished will have been 3 years (I hope not longer). Because I don’t have the budget to hire more animators as I am self-funding this, my hero of an animator Chandra Sekhar Poudyal is hand-drawing it frame by frame. This is the one for sure that will happen.

Then I have two Feature Films that I am looking to get off the ground. One is called ‘Amare’ which is ‘a coming of age’ story set in a U.S Prison, coincidentally enough in California, and the other is called ‘Mujō’ which means impermanence in Japanese. In respect to ‘Mujō’ we are actually casting the film at the moment so I will talk about this a bit more as it’s a bit further along than ‘Amare’. The idea behind the film originated in that most people intellectually understand impermanence in that we live and we die, but nearly nobody has actually realized that. What do I mean? Well there is a difference between reading how to drive a car and driving a car, a difference between knowing the path and walking it. Intellectually understanding something in most scenarios is not liberating, but realizing something is. So I wanted to make a film that through watching it, you REALISE impermanence.

So again this was the first question I asked myself as per answer to question 5. Then the next step was to find the right story to help facilitate the overall objective and that’s where my brilliant screenwriter John Hörnschemeyer came in. The film is set in Japan, and we are hoping to shoot next Spring in 2018.

QRG: What is your favorite pastime?

CT: This is going to sound incredibly lazy, but at the moment my favorite past-time is probably talking to my friends over the phone as I really don’t have much time. I do like a bit of tennis mind you, but not very good!

QRG: Mr. Trafford, thank you for allowing me this interview and now that it is done I thought I’d share my views on your short film. Please see below:

“The Voice in the Head” was very interesting and intriguing to say the least because I think most of us battle with that question. What I love about the film is how you showed how the young lady was basically between both worlds on opposite ends of the spectrum. She was normal but in her own thoughts while the insane was also in her own thoughts. Ye the normal found herself at one time or another unaware of surroundings as well; dwelling in her thoughts and speaking out loud. Most of us live this way and you captured it perfectly.